Grape Jelly for the Birds~Good or Bad?

Since Ballie was diagnosed with CRF I have been sticking close to home and hanging out with him to see how he reacts to the medications.

Ballie is doing much better~not gaining weight, but he seems happier.

He likes looking at the birds and chippymonks. 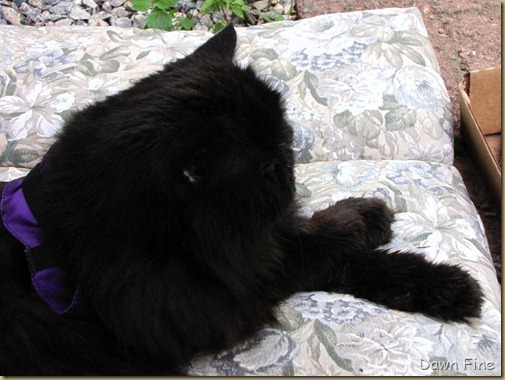 My parents put Grape Jelly out for the Baltimore Orioles 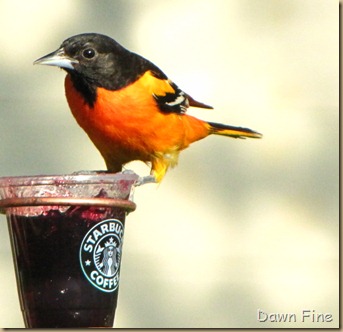 There is a constant flow of birds to the jelly… 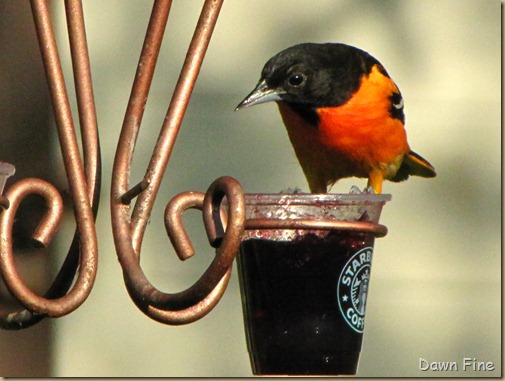 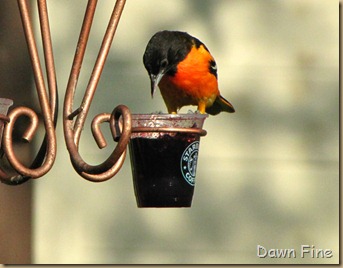 I wondered how good it really is for them..So I googled and found this information.

I confess that I had a prejudice against this practice [feeding jelly] the first time I saw it...about twenty years ago in a relative's yard. It just didn't look right. So I did some digging...as much as it is possible to do, which isn't much and it certainly hasn't been quantified, but it all makes sense. One source was a good friend who is an internist...he said that high sugar foods may trigger a bird's satiety gland, much as it does in children, causing it to feel satisfied when it has had little in the way of nutritional value. He also said that sugar may be addictive for birds as it certainly can be in humans, and that a bird might develop a strong liking for jelly and spend less time searching for natural foods.
Then I queried my friend, Kent Mahaffey, who was manager of the San Diego Wild Animal Park's famous free-flight Bird Show for more than two decades. Kent had primary care responsibility for hundreds of birds from many families. He said he would never allow any birds under his care to have jelly


He summarized as follows: "Birds developed the way they did by adapting to the environments in which they lived and the foods that sustained them. We do our best for them when we stick as closely as possible to their natural diets."

I'm not sure I'm ready to jump on the anti-jelly bandwagon yet. Birds do have a way of regulating their diet. Orioles do stop eating jelly and that ends right about the time oriole chicks hatch--I think they know enough to switch to protein heavy foods.
Also, when people tend to go through jelly the most is during migration, you aren't getting the same oriole coming all day long, you're getting several coming through out the day, they aren't eating only jelly.
Of course, this is only based on anecdotal evidence so it's not scientific. 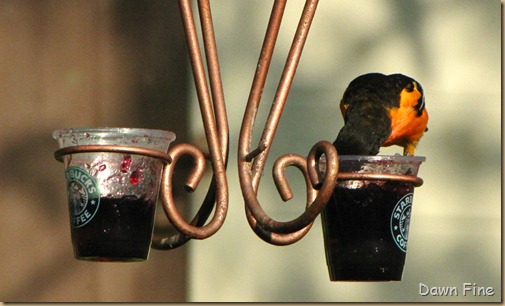 This information from the Birdwatchers General Store

This brings us to a subject that many oriole fans don’t like to think about. In recent years, offering birds grape jelly has become super popular. In some cases it’s become the birds’ food of choice. As is the case with many humans, orioles like anything sweet and the sweeter the better. Grape jelly is very sweet, maybe too sweet. It has a higher concentration of sugar than oranges or the sugar water mixture we put in our feeders. There’s a concern that the birds are ingesting too much of a good thing. And what is worse, the adults often feed globs of jelly to their babies. That’s bad. Our good intentions could cause young orioles to have unintended health problems, not to mention astronomical dental bills.

My suggestion is to use jelly in May when the orioles first arrive. It will give them the boost of energy they need after their long migration. However, it’s been suggested that we discontinue using jelly when the babies hatch in June and early July. Also, use “low sugar” jelly, but not anything with artificial sweetener in it. (Even birds hate that crap) And most importantly, offer jelly in very small amounts. It’s critical that we do all we can to prevent the birds from getting the sticky jelly on their feathers. Each summer wildlife rehabilitators have to clean scores of helpless orioles that end up with sticky and matted feathers.

Duncraft has BirdBerry Grape Jelly that they say is better for the birds because it contains no corn sweeteners.

I still don’t know what the right thing to do is for the birds..

Anyone out there want to chime in with some information? 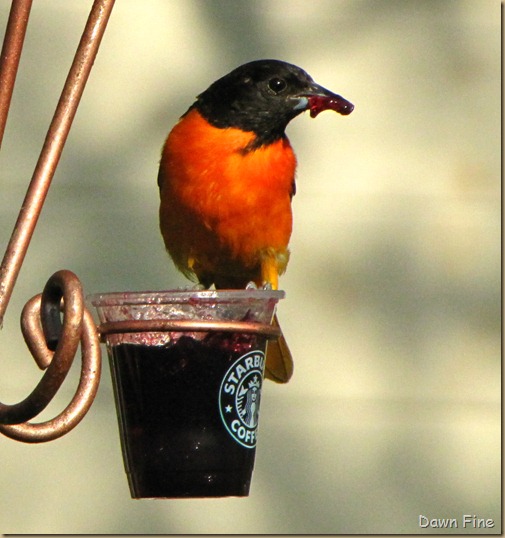 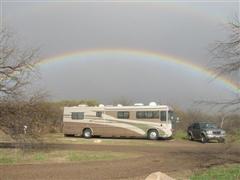